Enter your City name or Pincode

Beawar is a flourishing urban centre situated in the Ajmer district of Rajasthan, India. Located approximately 184 km from the Pink city of Jaipur (capital city and most prominent metropolis of Rajasthan), Beawar was once the economic capital of Merwara state of Rajputana. Lying amidst the Aravali range of mountains, Beawar is a thriving business hub, particularly for wool mandi and cotton mills and is the official address for a lot of cotton presses in the region. 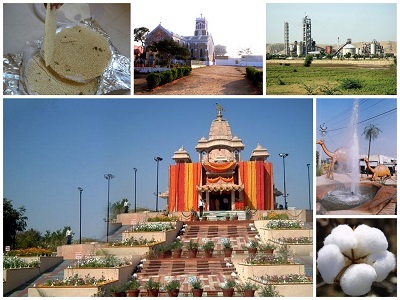 Today, Beawar is the home of a lot of small and medium scale industries and transformed into a principal trading centre for various arts and crafts developed in the region. Beawar has a got a remarkable credit to its name that the Right to Information movement in India was first started in this city (April 1996), which ultimately changed the public accountability conception in the country. Let's get to know more about the city of Beawar.

Tales behind the Name Beawar

The Battle of Shyamgarh was fought between the British and Kathats tribes. The British people established a living quarters with fortified walls for security reasons and for future plans. Furthermore, they set up a cautionary signboard with the words 'Be Aware' as a word of advice to the officers traveling by or getting out of the quarters. As time passed by, people started using the very words put up on the sign board 'Be Aware' as Beawar!

Beawar - Past and Present

Beawar city is located at an advantageous location in the western state of Rajasthan. The urban centre was originally established during the year 1836 as a temporary living quarters built by the British for their soldiers, at the crucial location tri-junction of the royal states of Jaipur, Jodhpur, and Udaipur. Founded by Colonel Charles George Dixon, Beawar was an integral division of British India, and the administrative home base of Merwara territorial dominion. Right from the earlier times, the part where Beawar city rests is addressed as Magra-Merwaran, and it was referred after a local settlement known as Beawar Khas by the British people. The region was governed by the kathat and Rawat Rajputs who were considered as fierce tribes.

The attempts of the British to capture the region from the Rawat Rajputs and kathat ended in vain as the vehement tribes were spread out across a lot of minuscule settlements and they were first-class in leading a form of irregular warfare using tactics that include ambushes, mobility, sabotage, raids and many other operations. The Battle of Shyamgarh remains a significant case in the history of Beawar as the British won their battle against the Kathats. Following the loss, the Kathats gave up the fortress of Shyamgarh, but engaged guerilla tactics making eminent loss to the Britishers. Subsequently, the British established a living quarters for the soldiers with bastioned fences for security and future missions.

Today, Beawar is a booming business centre that matches the entire prerequisite for becoming a district of the state Rajasthan.

Geography and Climate of Beawar

Beawar is located at 26.1° N 74.32° E. The city has a mean elevation of 1440 feet. The city is fortunate to have situated in a mineral rich region as Beawar has reserves of granite, magnesite, quartz, wollastonite, masonry stone, and limestone and so on. The urban centre of Beawar has two significant divisions and they are Inner City and Outer City.

The outer area of Beawar city is regarded as one of the rapidly growing areas in the region. Most importantly, the outer city of Beawar houses all the transportation hubs that include Beawar central bus station, Beawar railway station (station code: BER), and many travel agents and tour operators. A lot of residential complexes are also being developed in the outer city, especially on Delwara road, Ajmer road and Sendra road. The outer city also houses numerous hotels, shopping centres, movie halls, and educational institutions and so on.

Owing to its rich historical background, Beawar city celebrates and observes a lot of regional festivals and fairs. Baba Ramdev ji (a Hindu folk–deity of Rajasthan) Beawar Fair is one among the major fairs of the city. The local population comes together to fete Badshah ki Sawari which is grandly celebrated in memory of the one-day king 'Agarwal'. The beautified Badshah heads up to the magistrate office, and gives its resolutions for the public. On the day of Badshah, local people of the city give special performances in Teliwara which usually attracts large crowds.

Another famous fair of Beawar is Lok Devta Tejaji fair. It is a colorful Indradhanushi Mela that is observed on Bhadprad Dasmi Shukla Paksh annually at Tejaji Mandir at Teja Chowk, Beawar. The Gair festival that usually takes place two days after the festival of colors Holi is also a unique one in the city. Furthermore, the city celebrates Dushera in a grand manner by burning an effigy of Ravana.

The urban centre of Beawar plays a crucial role in the economic system of the state Rajasthan. As a commercial and business centre, the city is an important revenue contributor to the state. It is important to note that Beawar is regarded as the most prominent manufacturer of cement in all of North India and the city is the home of the leading cement manufacturer Shree Cement (BSE: 500387) at Bangur Nagar.

The city houses numerous cotton presses and is considered as the second biggest wool trade centre in the region. Some of the other important industries in Beawar include food processing units, masala industries, pre-stressed concrete pipes, mineral based units, wooden furniture manufacturers, machine based units, machine tools and add-ons, plastic productions, textiles and asbestos cement pipe units and so on.

Beawar is famous for its religious sites that attract thousands of devotees all over the year. Some of the celebrated religious sites of Beawar include Shoolbread Memorial C. N. I. Church of Beawar, Ajmer Road Dadi Dham, Shri SumatiNath Jain Temple, Sankat Mochan Hanumaan Temple, Aashapura Mata ka Mandir and so on.

Are you a Business Owner?

Add the products or services you offer